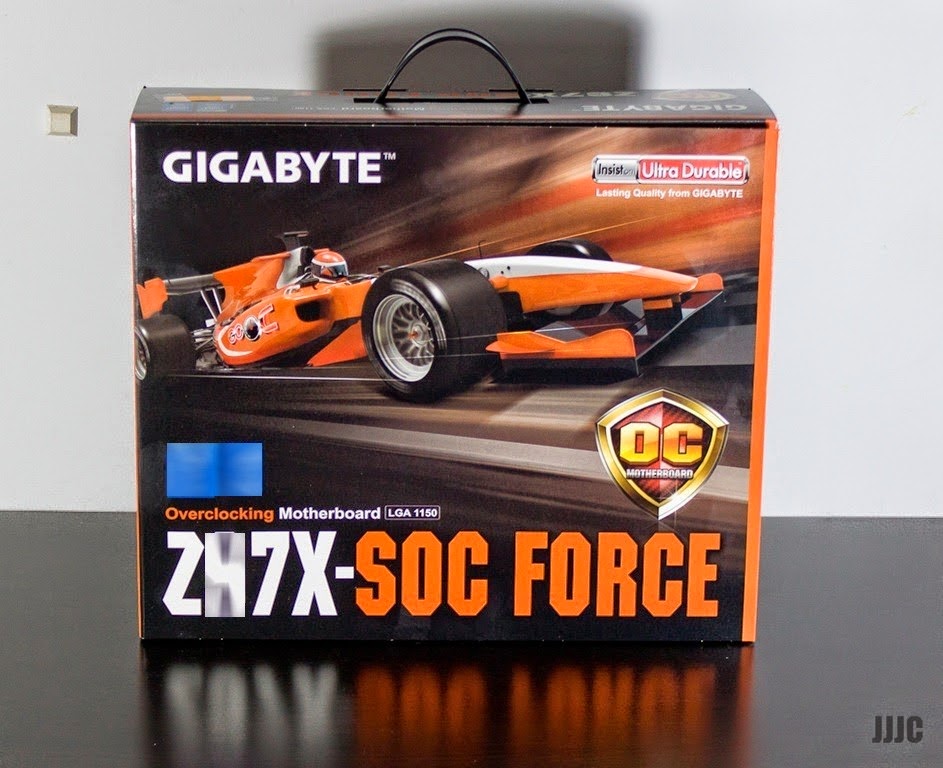 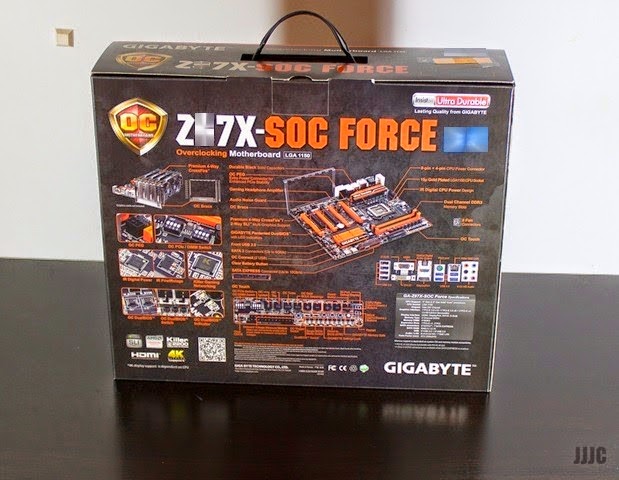 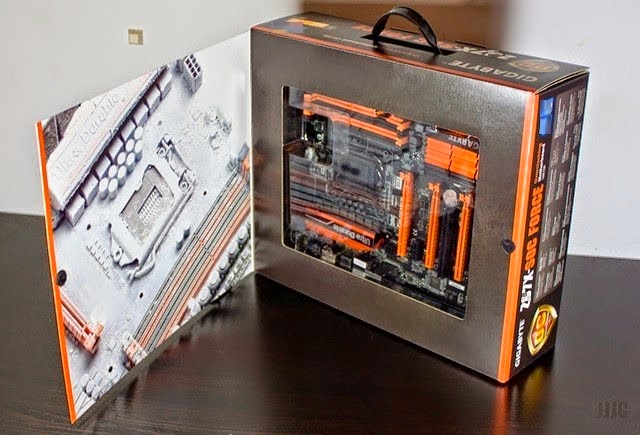 Now to the actual board itself. Branding the very recognisable orange and black theme, we have a very nice looking board. It even features black caps to carry the look. It has four PCI Express slots in total, supporting 2 way NVIDIA SLI and 4 way AMD CROSSFIRE. The top slot runs at x16, if two slots are in use x8, and if all four are in use the setup will move to x4 mode as bandwidth is shared between the slots. For power connectors we have a 24 pin ATX main power connector and 8 pin ATX power connector as well as an additional 4 pin ATX power connector and 6 pin OC PEG power connector for additional power if needed. We also have a USB 3.0 header, and a USB 2.0 header. Be sure to check out the full review coming soon for the full list of features on the board. 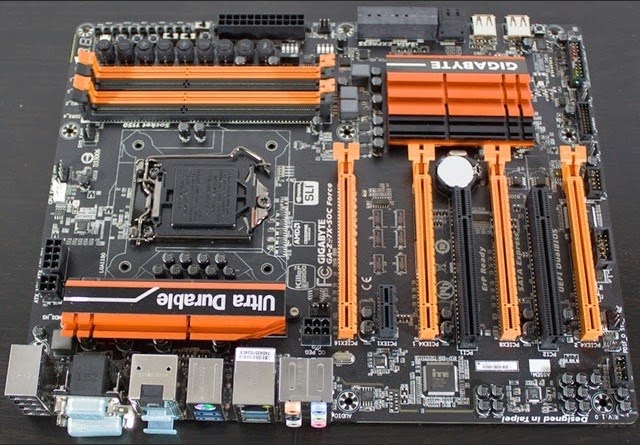 Moving to the back of the board now and we are met with the back panel connectors. Connectors here from left to right are 4 x USB 2.0, VGA D-SUB, DVI-D, Optical S/PDIF Out, HDMI, DisplayPort, PS/2 Keyboard/Mouse, 4x USB 3.0, RJ-45 LAN, and audio/mic in.

To the end of the board we have some more connectors. These are (again from left to right) 2x 2.0 USB, 6x SATA 6Gb/s, and 1x SATA Express port. The two USB ports featured here are incredibly handy if you use the board on a test bench setup as you can plug the keyboard and mouse in without having to run them to the other side of the system.

Now we have the area of the board branded OC Touch. From an overclocking perspective, this is where the magic happens. Let’s have a quick run through of the buttons and what they do. On the very left we have two sets of dip switches with four switches on each. The first of these is the OC DIMM switch. This allows you to enable and disable memory slots without having to physically remove your memory. Such a feature would be very useful if you were trying to diagnose a memory issue without having to tear apart your system, and certainly also useful for testing the strength of different modules when overclocking without having to remove them. The next dip switch does the same thing to the PCI-E slots.

Next up is the OC Ignition button. This keeps the system powered even while it isn’t running. Useful for keeping fans running after the system is off to keep cold vapour falling on to the board, good to check on your GPU voltages after modding it before turning it on, and also handy to avoid some cold bugs that occur when the system resets or powers off. A very overclocking minded feature. Then we have the Tag and Turbo button.. The Tag button lets you  load a BIOS profile you have saved, and the Turbo button lets the board load up an optimized profile for your setup to get you overclocked and running fast with the simple press of a button.

Moving on and we have the Gear, CPU BCLK Freq Up, CPU BCLK Freq Down, CPU Ratio Up, CPU Ratio Down, and Power button. The CPU BCLK buttons allow you to alter the system’s Base Clock setting up and down. The Gear button allows you to set to change 0.1 or 1.0 per press. The CPU Ratio buttons allow you to change the CPU multiplier up and down at the press of a button. The Power button does the obvious and turns your system on and off.

Lower still and we have the OC Trigger switch to enter the system into a low clocked state, good if you’re running on the very edge and need to down clock to save a screenshot without crashing. Next to that we have some voltage measuring points. These allow you to measure VDIMM, PCHV, VSA, VAXG, VIOA, VIOD, VRING, PCHIO, DDRVTT, VCORE and VRIN voltages with your multimeter. Another very cool overclocking feature.

Here is a little snap showing the handiness of the OC Brace. For people who use the board on their test bench (like myself) the OC Brace is a great addition that supports heavy graphics cards so you don’t have to worry about them being unsupported and sagging or snapping. There is also plenty of room around the socket for installation of large coolers, while not the largest on the market my Coolermaster Hyper 212 was a breeze to install. 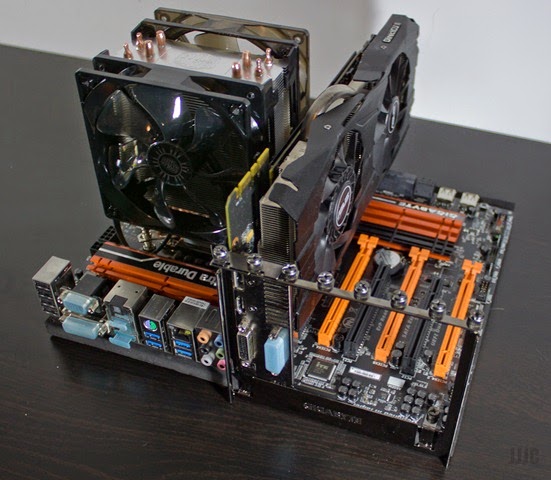 The motherboard comes bundled with a bunch of handy software to maximise your use of the board. My favourite application by far is GIGABYTE’s Easy Tune. This allows you to change a plethora of options whilst you are in Windows without having to reset the system and go back into BIOS. Everything from CPU clocks to memory voltages. 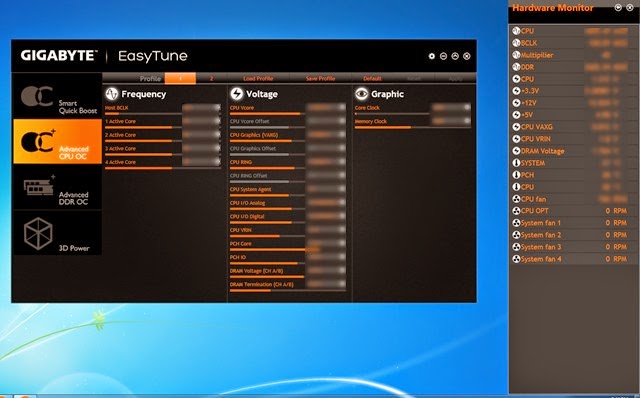 I haven’t had a lot of time to test all of the board yet, but so far it has proven to be very solid for me and I can’t wait to put it through some more tests. I'll be putting up some testing in my full review.


That concludes my quick look at the new Z97X-SOC FORCE from GIGABYTE. Be sure to stay tuned, I will be back soon with a more in-depth review. I hope you enjoyed reading.
Posted by Unknown at 23:03