GIGABYTE are now renowned for their overclocking series of boards that manage not only to appeal to the extreme overclocker, but also the serious gamer or power user. The Z87 and Z97 boards managed to achieve this, and now for the first time since X58 the OC line-up has come back to an X chipset, Intel’s “main” platform, X99.

The board comes package in a nice and large premium box, as often seen in GIGABYTE’S top tier boards. 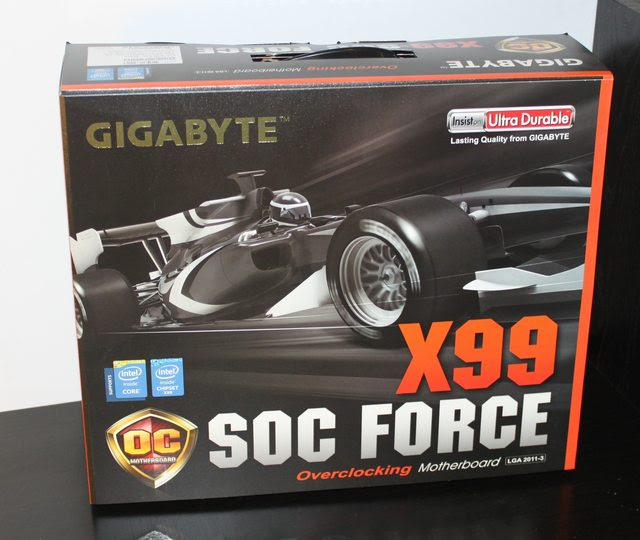 The back of the board features a nice outline on the features of the board, of which there are many. This is certainly no stripped back bare bones board. 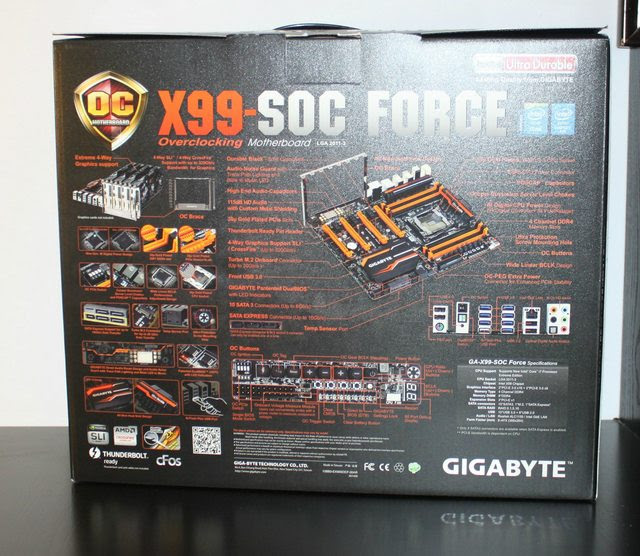 Accessories included in the box are: 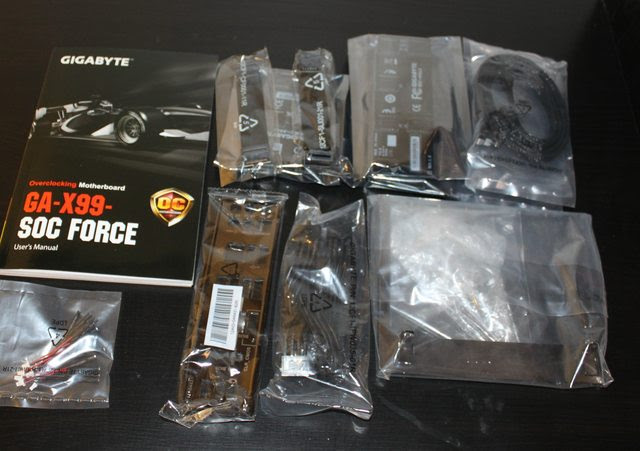 Here’s a little look at the braiding on a SATA cable, nice touch.

On to the board itself now, branded in the familiar orange and black we’ve come to expect from GIGABYTE’S OC offerings. The matte black of the PCB does a lot to give the motherboard a clean layout and helps highlight the orange accents across heatsinks and slots. 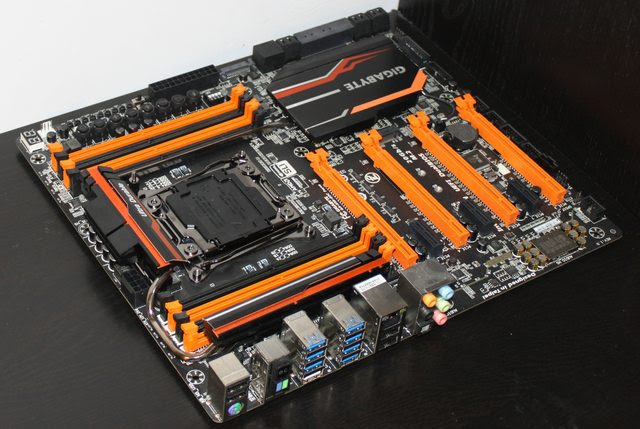 Looking to the CPU socket and it looks like GIGABYTE have given good consideration to keeping the area as clear as possible. The area is easy to insulate and makes for easy work of a copper pot or standard cooler installation. Consideration may need to be given for large tower coolers with eight memory slots and a PWM heatsink close by, however they don’t look to be overly intrusive. 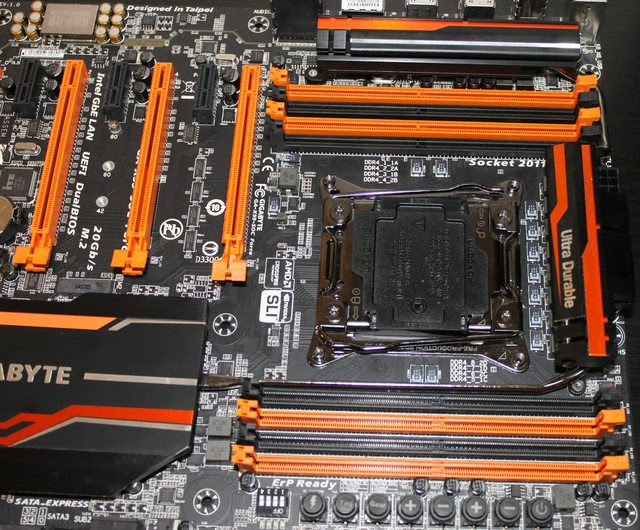 The board features eight memory dimm slots supporting up to 64GB of memory of speeds up to 4000MHZ (O.C). A cool thing to note with the memory slots here is that they are no longer mounted to the board via pins through to the other side, but are instead surface mounted. This helps reduce interference and improves signal, and also helps to eliminate issues with solder points breaking from board flex – an issue I have encountered a couple of times.
Power wise we see eight phases feeding the CPU using a digital PWM and PowIRstages components. GIGABYTE have opted for a less is more approach here with high efficiency components. Connectors feeding the CPU and board are a single 24 pin and single 8-pin ATX connections. There is also an OC-Peg connector ( ) to feed the board extra power if required.
Over to expansion slots and we see there are four PCI-E slots with three PCI-E x1 slots running between them. PCI slots have been left off of this board, so if you do have any of those you would need to source PCI-E replacements. PCI devices are becoming less and less common now so it’s not unexpected to see them left out of board designs. 4-Way SLI and CrossFire is supported. 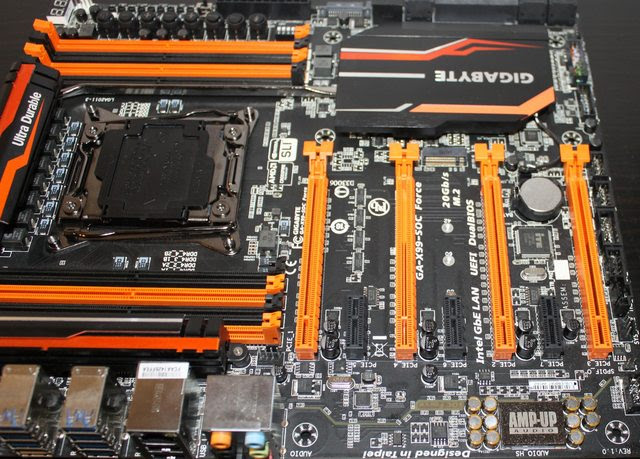 You can also see the audio setup here, powered by a Realtek ALC-1150 chip and ELNA capacitors. The sound components have been isolated from the rest of the PCB to further improve signal.

Moving back around to the front of the board now and we have one of my favourite parts of the board, the OC buttons. It almost looks like what one might expect to see in a NASA control office, and it gives us great control over the board on the go.

This handy graphic from GIGABYTE outlines the buttons and what they do.

As you have seen, this is a fully featured board. From overclocking centered features to a dedicated audio set up and plenty of expansion ports - Nothing has been left out. Let’s go ahead and look at how it performs now.

BIOS
The BIOS will be familiar to people who have used the Z97X-SOC Force board, GIGABYTE choosing to follow a similar design with only a few changes.
There are three viewing modes available to use depending on how you like to use the BIOS.
'Startup Guide' for people who don't like to delve too deep, an easy menu to change basic settings. 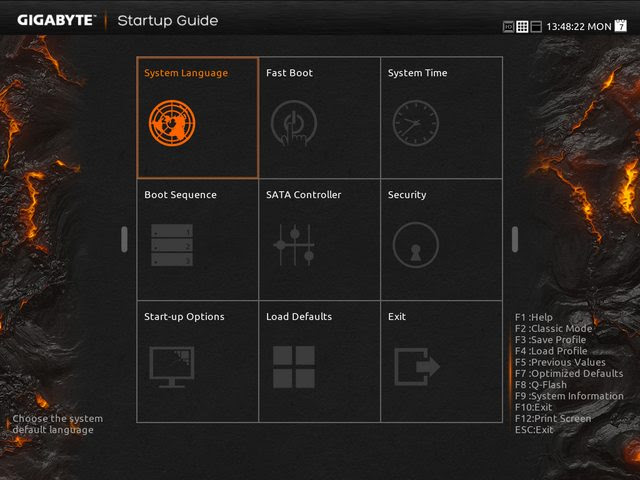 The UEFI graphical mode gives you all the settings you need with a cool interface to go with it. 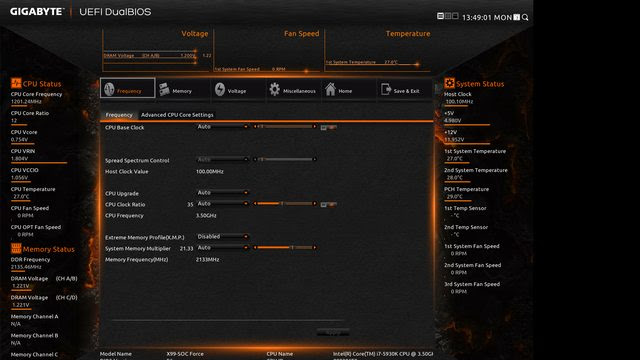 The classic mode for people who just want to fly through and change settings without any 'frills'. Similar to GTL as opposed to EasyTune. 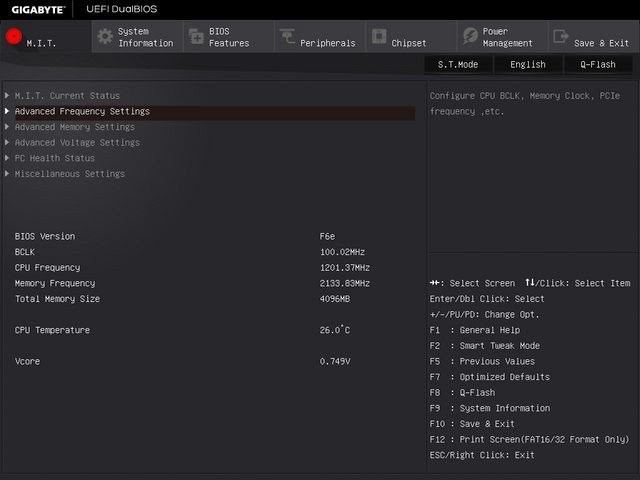 SOFTWARE
GIGABYTE have also included a bundle of software with the board, the most valuable of which is EasyTune. EasyTune is like a fully featured BIOS in Windows. It allows us to change a large range of settings and lets us overclock the system without having to reboot the system. It allows us to change CPU frequency, voltages, memory timings (yes finally overclockers, memory timing control in Windows is finally back!), and power settings. It also has some handy presets for people looking to boost their performance without having to work through all the settings. 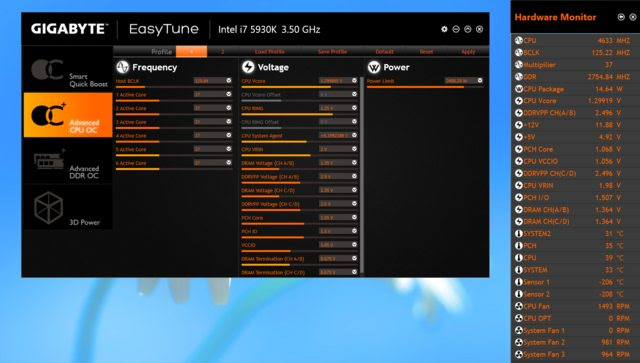 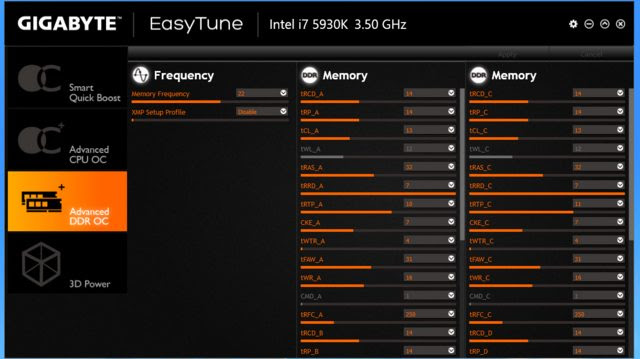 GTL is another handy piece of software, particularly handy for extreme overclockers. GTL, much like EasyTune, allows us to overclock our system without rebooting - Just a trimmed and lighter version. 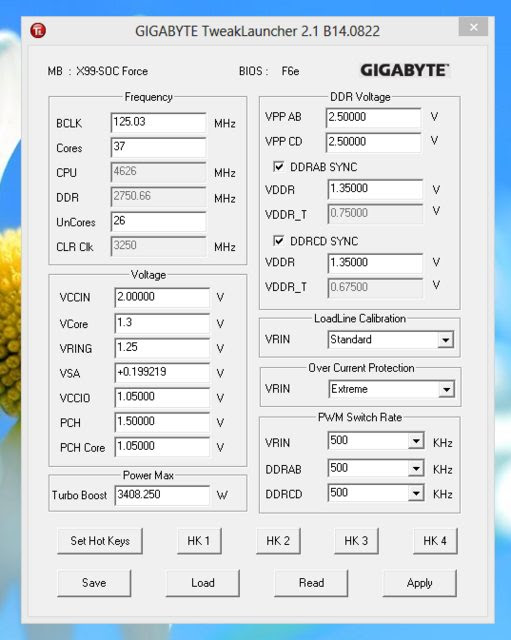 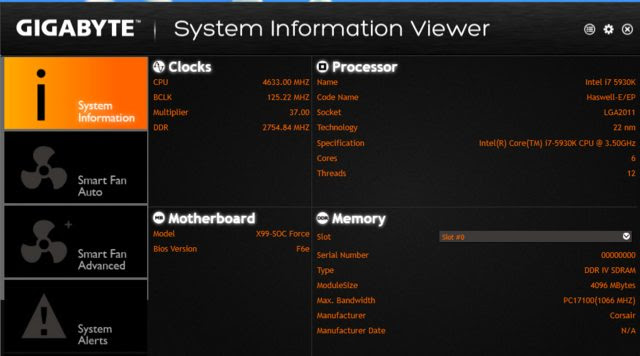 Lastly is GIGABYTE’s Ambient LED control. The board features LEDs on the rear of the board as well as the PCH heatsink. This software allows us to control how they work, whether they be on “still”, pulse, or react to playing music. A bit of a fun feature for people who like to play around with that sort of thing, but it spent almost all of its time in the off position on my desk. 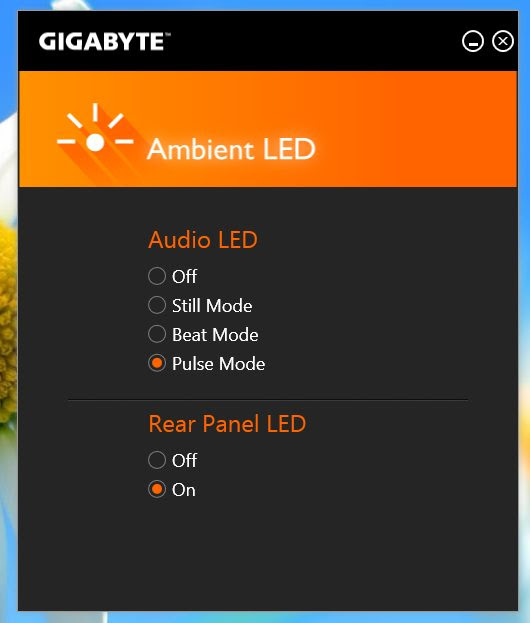 Overclocking
The X99-SOC FORCE as expected manages to overclock the system without any hassles. Ambient temperatures were quite warm in Perth when I did my testing, so I was thermally limited however I still managed to get some decent clocks out of the setup.

Without much effort at all the CPU was able to be overclocked to a stable 4.63GHz on all cores with 1.3v and 3.25GHz Uncore with 1.25v. My particular kit of memory didn’t want to budge much, however I was able to drop the primary timings to 13-14-14-32 1T and raise the frequency a touch to 2750MHz while sticking to 1.35v. A higher end kit would no doubt allow the board to flex its muscles a little more and get some serious memory clocks going. 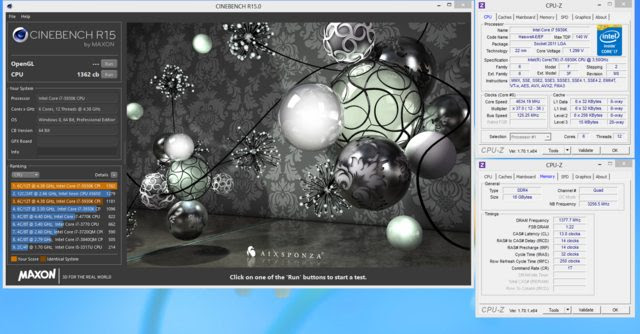 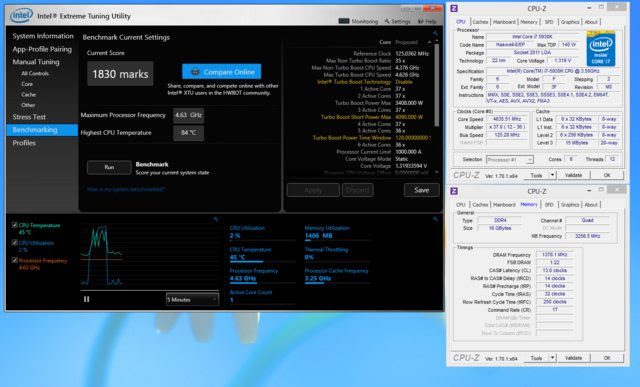 GIGABYTE have added another successful board to the OC lineup. Not only does this board manage to follow the principles of the others, but it continues to build on them. An overclocking motherboard that isn’t just for the overclockers, it has something to interest almost anybody who takes interest in their system.

Be sure to check out the overclocking guide from Sofos if you want some tips on getting the most out of this motherboard and platform: http://www.teamau.net/2014/10/gigaby...sofos1990.html